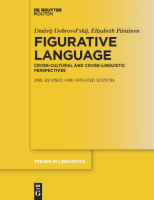 The book develops a Theory of the Figurative Lexicon. Units of the figurative lexicon (conventional figurative units, CFUs for short) differ from all other elements of the language in two points: Firstly, they are conventionalized. That is, they are elements of the mental lexicon – in contrast to freely created figurative expressions. Secondly, they consist of two conceptual levels: they can be interpreted at the level of their literal reading and at the level of their figurative meaning – which both can be activated simultaneously.
New insights into the Theory of Figurative Lexicon relate, on the one hand, to the metaphor theory. Over time, it became increasingly clear that the Conceptual Metaphor Theory in the sense of Lakoff can only partly explain the conventional figurativeness. On the other hand, it became clear that “intertextuality” plays a far greater role in the CFUs of Western cultures than previously assumed.
The book’s main target audience will be linguists, researchers in phraseology, paremiology and metaphor, and cultural studies. The data and explanations of the idioms will provide a welcome textbook in courses on linguistics, culture history, phraseology research and phraseodidactics.